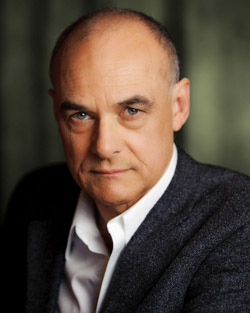 John has been a professional theatre artist for over 35 years. He is currently the Artistic Director of New Theatre of Ottawa where he directed the complete 2011-12 season. John has taught at The National Theatre School, Dawson College, Algonquin College, St. Lawrence College and The University of Ottawa and has given workshops at many high schools. He has worked extensively as an actor across the country and has been a member of The Stratford Shakespeare Festival Acting Company. Based in Ottawa, he has performed with the Great Canadian Theatre Company, the National Arts Centre, Third Wall Theatre and the New Theatre of Ottawa. As a director he has worked with many theatre companies including GCTC, The Company of Fools and The Gladstone.

Well, do I enjoy reading it? Does it keep me reading, as in, what’s going to happen next? I love a story where the author has taken the care to write something that follows a simple principal in the microcosm of writing the piece, asking themselves the question, does each line follow the last? Someone called it “triggers and heaps”. At the same time keeping the whole piece in mind so that there are moments of foreshadowing and echos of previous events, images or thoughts. I think originality of the story and use of the strength of live performance are also important; after all, why write television for the stage?

Sometimes a script is ready to go, just read it out loud and that’s it. Mostly though I believe a good read with a detailed working through of the text can lead to some questions for the author which can help perhaps clarify and refine the work. Plays can be overly workshopped though and in the process lose their way. Just like in film, the first take is usually the best. Of course this is art so everything I just wrote could prove to be 100% wrong 99% of the time.

No. For every rule there is an opportunity to break it.

Personal preference: Clear and readable is best. Stay away from cluttered text i.e. line spacing that’s condensed and mixes italicized stage directions with normal dialogue. Of course, again, rules are made to be broken but readable is important.

How do you feel about detailed stage directions?
It depends on the play. Mostly they’re unnecessary so less is more. Obviously when physical action takes place where it has a direct relationship to the story line then absolutely, put it in. Directions like (he frowns) are usually an impediment to the director and the actors because it limits their creativity of expression. Put them in if you absolutely feel you need them but beware of over control, it could kill your play. You also don’t want the production to be so wrong in it’s interpretation of your script that you want to run and hide or worse, harm someone for ruining your work. I’m afraid to say that stage directions may not prevent this from happening. Your best asset in making sure you’re going to find your work done well is to write it well. There are a lot of great plays that have little in the way of stage directions and plenty with loads… there’s that rule again, there are none.

What turns you off a script?
Predictable plots and hackneyed text. I think the theatre is our best live art for presenting the “human condition”. I always ask myself, “what does this mean to me?” when I read or watch a play. By that I mean, in my life or in life in general. Do I understand what it means to me personally or to life and human relationships… it could be comic or tragic.

Difficult question. The best answer I can think of is: plays are not a forum for topics, they are a place where stories are told and an audience experiences something that you hope makes a connection. Brecht was best when his message was told in a great story and fortunately for us he told great stories most of the time!

What bad habits from television / movie scripts does a playwright need to break?

Writing for television is formulaic, writing for the theatre is not. Don’t think kitchen sink and don’t write about your pet peeve. Write from the heart but remember that it’s got to be interesting to an audience. Use your imagination and use the idea of “theatricality” it’s our biggest strength and tool.

There are too many! I suppose “Waiting for Godot” would have to be in the list, I loved “No Great Mischief”… there are just too many to list! Why are they important? They explore our “being”.

Fix their work. Work can always be revised and reworked but not “fixed”. This word doesn’t belong in our work.

There are some very exciting plays being written now. Canadian plays are very popular in the UK and increasingly around the world because we’ve gone past the self and have embraced the universal, without forgetting who we are.

Use you imagination. Don’t be afraid. Don’t write tv.