Clear your calendars! April 30th-May 5th marks Pat the Dog Theatre Creation’s sixth-annual PlaySmelter Festival and missing out is not an option!

This year, Sudbury’s only festival of new Canadian theatre is proud to present a variety of original work from Northern creators near and far. Platforming work at all different stages of development, and celebrating collaborations with companies both local and national, reserve your tickets early to Pat the Dog’s most exciting series to date! Visiting artists are from the Yukon, Vancouver, Calgary, Edmonton, Newfoundland and Germany.

There are a limited amount of All-In Festival Passes ($85), which include all 4 Main Stage Performances, 3 Staged readings and a special secret for Festival Pass Holders Only Event Closing Night of the Festival. Act fast! 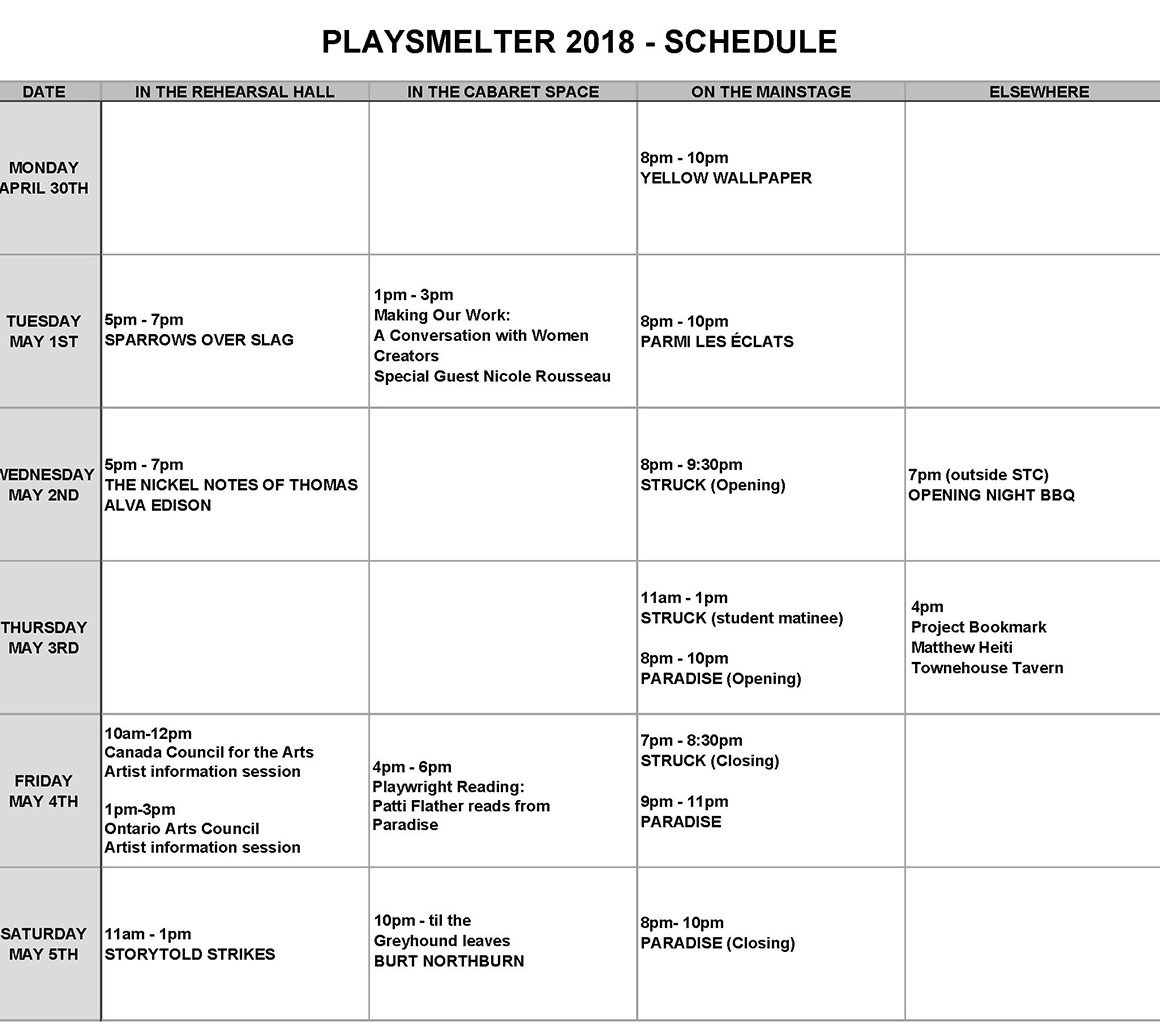 [ut_header align=”left” title=”PlaySmelter – New Work Theatre Festival”]The PlaySmelter Festival of New Works by Northern Theatre Creators is the only annual new works festival in Northern Ontario and is held in Sudbury. Starting in 2012, PlaySmelter has developed 10 original pieces by Northern creators, offered playwriting intensives for the community, and master classes with Emil Sher and Colleen Murphy (winner of the Governor General’s Award).

The Festival’s Public Staged Readings have fast become an institution, where food and drink are served alongside stimulating conversation about the process of theatre creation. New works presented to PlaySmelter’s enthusiastic audiences have included new plays based on northern landscapes, work in clown, works by aboriginal artists in addition to text-based plays.All dollars raised for PlaySmelter stay in Sudbury to support Northern theatre creators. In 2015, the PlaySmelterFestival hired more than 30 local Arts workers – all are compensated based on professional union rates.[/ut_header]

[ut_team_member style=”member-style-2″ avatar=”1371″ name=”Lisa O`Connell” occupation=”Artistic Director | Dramaturg” social=”%5B%7B%7D%5D”]Lisa O’Connell is Artistic Director of Pat the Dog Theatre Creation, producers of the PlaySmelter Festival. O’Connell is a Caucus Chair at the Professional Association of Canadian Theatres. She is double recipient of a Special Jury Award from Arts Awards Waterloo and has delivered the closing Keynote address at the Canadian Association of Theatre Researchers Conference. O’Connell has been published in Canadian Theatre Review, The Toronto Star, The Globe and Mail, Chatelaine, among others.[/ut_team_member]

[ut_team_member style=”member-style-2″ avatar=”1381″ name=”Matthew Heiti” occupation=”Artistic Associate” social=”%5B%7B%7D%5D”]Matthew Heiti is a writer, theatre creator and teacher, living, loving and working in Sudbury, North Ontario. He has written a novel, The City Still Breathing (Coach House Books) and a play, Black Dog: 4 vs the wrld (Playwrights’ Canada Press). His most recent play, Receiver of Wreck, was performed at PlaySmelter 2017, and he explores new work in strange places with Crestfallen (crestfallentheatre.com). In his spare time, he is usually working.[/ut_team_member]

[ut_team_member style=”member-style-2″ avatar=”1380″ name=”Nicole Smith” occupation=”Producer | Pat the Dog Theatre Creation” social=”%5B%7B%7D%5D”]Nicole Smith is (very proud to be) Pat the Dog Theatre Creation’s Producer. She also writes things and directs things, and in 2016, she founded sonderlust, a theatre collective dedicated to the creation of original work and the staging of women’s stories. Nicole’s work, both with and apart from Sonderlust, has been supported by the Metcalf Foundation, the Ontario Arts Council, Carousel Players, Mammalian Diving Reflex, Canadian Stage and the Shaw Festival. [/ut_team_member]

[ut_team_member style=”member-style-2″ avatar=”1379″ name=”Karen Thistle” occupation=”Producer | PlaySmelter Festival” social=”%5B%7B%7D%5D”]Karen Thistle was born and raised in Sudbury where she grew up with both literary and imaginary friends. A playwright with an Honours B.A. in English and Women’s Studies from Laurentian University and a M.A. in Journalism from the University of Western Ontario, she has worked with public libraries and non-profit arts organizations. As a playwright she participated in the 2nd annual STC Playwrights’ Junction (2012) where her play “The Intermediaries” was first drafted and later included in the Public Reading Series of the 2nd annual PlaySmelter festival (2014). In 2017 she participated in the festival’s inaugural Producer’s Unit which lead to her joining PlaySmelter in 2018. She continues to meet and work with fellow playwrights in the Sudbury Writers Guild’s Inklings group.[/ut_team_member]

[ut_team_member style=”member-style-2″ avatar=”1386″ name=”Sarah Dennison” occupation=”Communications | Social Media” social=”%5B%7B%7D%5D”]Sarah Dennison is a playwright, props builder and designer based in Cambridge, ON. After graduating from the University of Guelph’s theatre program, she spent three seasons with the Thousand Islands Playhouse and built props for over thirty productions. During that time she also worked as a freelance props builder for St. Lawrence College and Theatre Kingston. In 2013 she was a member of the Playhouse’s inaugural Playwright’s Unit (directed by Charlotte Gowdy) and in 2015 was director, designer and co-creator of Finding Temperance (The Muddy Mary Project). Sarah is the commissioned playwright for Sonderlust’s debut project “Wives Tales,” which through process, has become Wild Swans.[/ut_team_member]