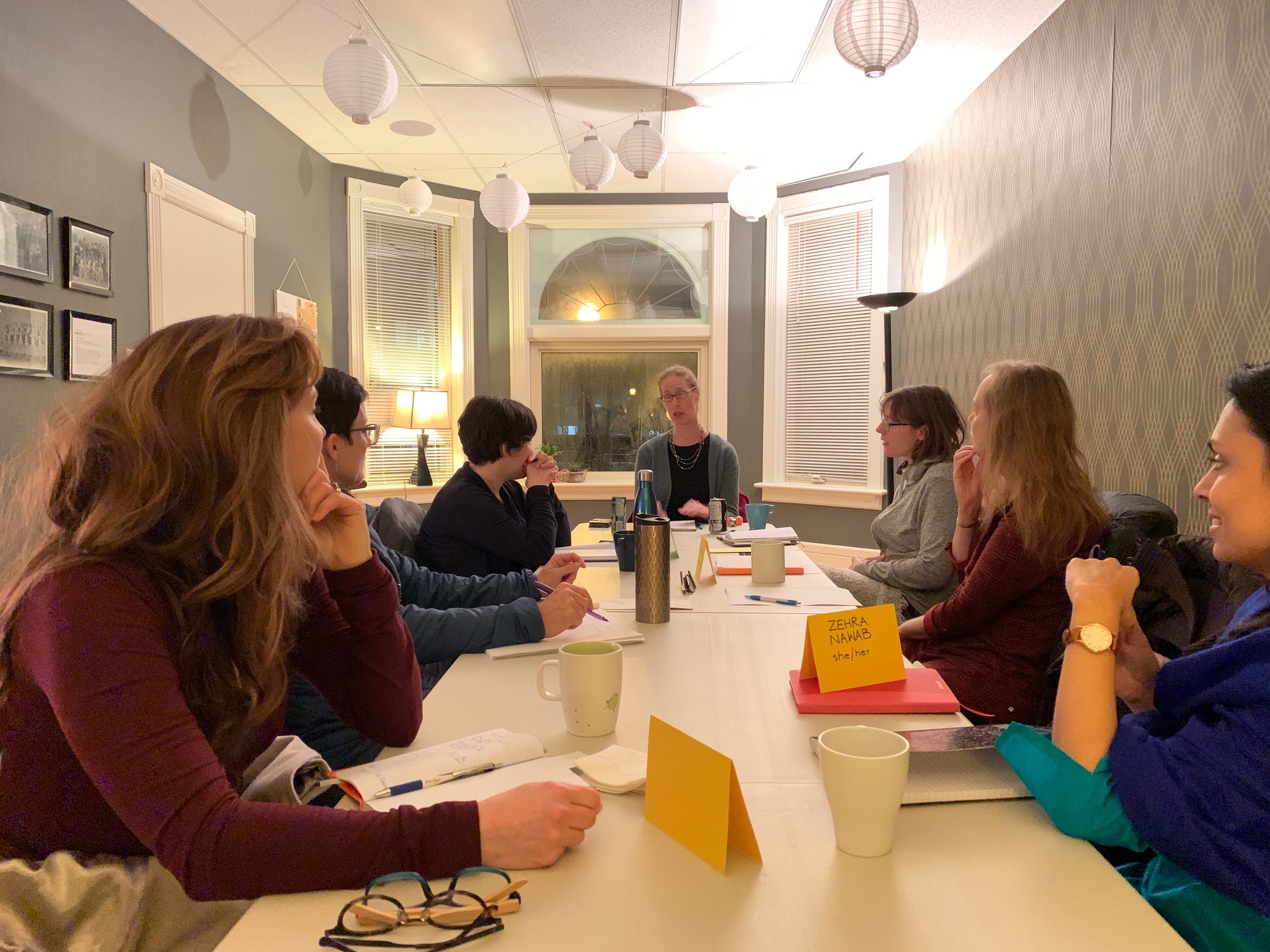 Rose Cullis (she/her) is a queer writer/educator, who loves and celebrates all forms of
theatre and performance and is thrilled to be part of the Women’s Room this year. She’s
had short stories, plays and monologues published in a number of theme-based
anthologies, including Canada On Stage (Playwrights Canada Press), Two Hands
Clapping (Signature Editions) and Outspoken (Playwrights Canada Press). For a
number of years she performed in cabarets such as Hysteria, and Cheap Queers. Her
play, The Happy Woman , was produced by Nightwood Theatre in 2012, and short-listed
for The Carol Bolt Award. Most recently, she won third place in Event Magazine’s
Creative Nonfiction Contest with an essay entitled “My Beautiful Madness” about a
performance art piece she offered to the wrong audience, with devastating
consequences. She completed an MFA in Creative Writing at Guelph University in 2017
and currently has two plays in development: The Amazing Grace Jones Spaceship . and
After/Baal .

Anne Doelman is based in Waterloo Ontario where she works as an English, Drama and Communication Technology teacher. She fell in love with storytelling for the stage as a young actor in Original Kids Theatre Company (London, Ontario) and went onto study drama at Queen’s University. She is currently finishing her thesis, a YA novel exploring female genius, for her MFA in Creative Writing at University of British Columbia. When avoiding deadlines, Anne falls down internet rabbit holes that lead her to topics like theology, do it yourself furniture construction, Hannah Arendt, the dynamics of codependency and any medical ailment she thinks she might have at the time.

Camille Intson is an award-winning writer, multidisciplinary theatre and performance maker, media artist, and researcher, born and raised in Hamilton, Ontario. Working at the intersections of queerness, femaleness, and neurodiversity, she creates playful and provocative multimodal works integrating digital technologies into live performance. Her prize-winning works as a playwright have been produced across Canada, and she most recently completed her Master’s in Performance Practice as Research at the Royal Central School of Speech and Drama in London, United Kingdom. Recent works include We All Got Lost (Best of Fringe, Best of Venue, New Play Contest Winner – 2020 Hamilton Fringe) and betweenspace (betweenspace2020.co.uk). Camille is currently living and working in Toronto, where she just started her PhD at the University of Toronto’s iSchool. She can be found at camilleintson.com, or everywhere on the internet (accompanied by her cute fluffy Persian kitten) at @camilleintson.

Meher is also a prolific theatre practitioner, and has directed, produced and acted for stage extensively. She was the recipient of the 2017 Davis Peace Prize (International House, New York) grant to conduct a theatre program for underprivileged students in Karachi. She has also acted for screen, most recently the critically acclaimed web series Pakistani web-series Churails (2020).

Aveleigh Keller is currently a playwright in residence with Unwrap Theatre, working on multiple projects with the company. A recent graduate from Sheridan College’s Bachelor of Music Theatre Performance program, Aveleigh has been performing professionally since the age of 10. She’s known for her soaring high belt and spitfire personality.  She’s a produced playwright, working on a multitude of projects, with the world premiere workshop of Dancing Under a Blanket with Unwrap Theatre Co. in July 2019.  Toronto, 1989 is being workshopped with Page 1 Theatre Co., and just came off an online workshop with TACTICS Theatre Co.

A proud Acadian originally from Bathurst, New Brunswick, Nancy Kenny is a fluently bilingual (French and English) actor, writer, translator, and producer, who currently makes Toronto her home. She is a human who does many things. Usually artsy things, but sometimes YouTube watching things. She likes to stand on stages or in front of cameras to tell stories, give voice to things that aren’t said, and hopefully make you feel something true in the process.

Nancy is the creator and solo performer of the award winning and critically acclaimed, Roller Derby Saved My Soul, as well as Everybody Dies in December. Her work has been recognized by the Canadian Comedy Awards, the Jessie Richardson Awards, and les Prix Rideau Awards, among others. Her next play, I Don’t Feel Pretty, is a multi-lingual exploration of failed womanhood, and will be presented through Theatre Passe-Muraille’s BUZZ Development Residency in Toronto in June 2022.

Amy Neufeld is a settler writing living and working in Kitchener Ontario. She is the co-founder of Lightning Banjo Productions, a theatre company for young audiences, and has written several plays produced by the company. Her plays explore classic children’s stories through a modern, feminist lens. Amy also writes fiction and essays, and has a blog where she is currently documenting her quest to become a River Phoenix Movie Completist. Amy has an Honours BA in English Literature from Wilfrid Laurier University, and a diploma in Theatre Arts from Grant MacEwan University. In addition to writing, Amy directs, produces, and teaches theatre. She is also an avid knitter with a fondness for creating cacti. She is thrilled to be joining the Women’s Room at Pat The Dog. Follow her on Twitter.

Vanessa C Spence is a classically trained theatre actor, published author, playwright, producer, and arts educator. She is a creative entrepreneur with over six years of experience in the performance arts industry and social sectors. Vanessa is the artistic director of Virtu Arts, a production company that develops and creates live performance art that is shared in a virtual space to be enjoyed by all.

At the root of her life’s work and her artistry, Vanessa seeks to inspire empathy and action by shedding light on the thought processes of women in marginalized communities. Her latest project entitled Stretch Marks, based on her self-published book of poetry explores the mental, emotional, and physical imbalances BIMOC (Black, Indigenous, Mothers of Colour) face through the many stages of motherhood. Part 1 of this three-part series focused on the moments leading up to a young woman’s decision of whether to become a mother or not.

Vanessa is excited to continue the development of Stretch Marks Part 2 with the support of this year’s Women’s Room cohort.