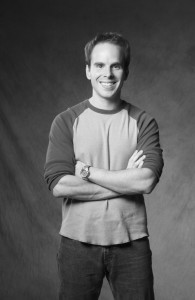 Daryl Cloran is the founder and Artistic Director of Theatrefront, a Toronto-based independent theatre company. His work as a director at Theatrefront has earned him numerous Dora Award nominations.

Recent directing credits also include: And All For Love (National Arts Centre), Generous (Tarragon), Afterplay (Shaw Festival), The Last Five Years (CanStage and MTC), This is How it Goes (Neptune Theatre), Helen’s Necklace (Grand Theatre), and The Play About The Baby (Soulpepper).

Daryl has been awarded the Canada Council’s John Hirsch Prize for an Outstanding Emerging Theatre Director, the Toronto Theatre Emerging Artist Award, and a Robert Merritt Award for Outstanding Director (This is How it Goes).  He is also one of three writer/directors for the interactive feature film Late Fragment, produced by the Canadian Film Centre/National Film Board, which premiered at the Toronto International Film Festival.

What do you look for in a script?
A surprise.

From a practical standpoint – is there an ideal number of characters  or script length?
Nope.  I’ll happily sit in a theatre for 9 hours if the playwright earns every minute of it. (Conversely, there’s nothing more excruciating than a 3-hour play that only has 10 minutes of compelling content.)

Does script formatting matter or can it get in the way?
Nope. As long as I understand what’s going on, the format doesn’t matter.

What turns you off a script?
Cliches.

Does the topic matter as much as the delivery? Or are there topics so important any discussion is worthy of staging?
Doesn’t matter how you deliver the story if you have nothing to deliver. Content is everything.  You must have an important story to tell.

If you could give emerging playwrights three pieces of advice, what would they be?
I’ll just give you one good one I heard recently. I’m directing “Rabbit Hole” by David Lindsay-Abaire right now.  He explains that as a young playwright, his instructor told him that in order to write a great play he must “write about what scares him most” He had no idea what that meant. Years later, he became a father. When friends of his lost their young child in a tragic accident, he suddenly realized that losing his child was the thing he was most scared of in the world.  And he wrote “Rabbit Hole”, about a young couple losing a child.  And won the Pulitzer Prize for it.