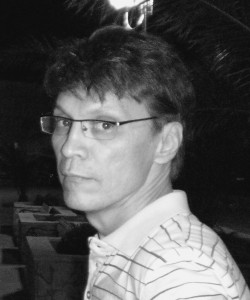 Dominik Loncar is the Artistic Director of the InspiraTO Festival, Toronto’s annual ten-minute play festival held in June (now in its 5th year). He has produced 45 ten-minute plays to date, as well as, directed and written numerous ten-minute plays.

This past season he directed Michael Kimball’s Say No More (2nd prize People’s Choice Award). Dominik encourages playwrights to get inspired and write a ten-minute play.  Visit www.inspiratofestival.ca for details.

What do you look for in a script?
The three “I’s”:
Is it imaginative? Is it interesting? Is it intriguing enough for me to want to see what happens next?

From a practical standpoint – is there an ideal number of characters or script length?
For a ten-minute play it should be … ten minutes.  You‘d be surprised how many ten-minute plays are not. It can be slightly shorter but not longer. Read it out loud.  Time it.

I’ve seen some great ten-minute plays done as monologues and with four characters. However, these are the exceptions.  I would recommend any one starting out in this medium to aim for 2 to 3 characters.  Each character is important. Every minute counts.

Does script formatting matter or can it get in the way?
As long as the script is easy to read and the format is consistent it doesn’t matter.

What turns you off in a script?
When it’s not a play but a skit, a scene, or a sketch.  A ten-minute play, like any other play, needs dramatic action.  Just get to the conflict quicker.

What bad habits from television / movie scripts does a playwright need to break?
Be more demanding of your audience when writing a play. Let them work for it. Maximize the effect of the theatrical element by really taking the time to understand the possibilities and limitations of the stage.

What is the most important play of the past 100 years and why?
No play can claim to be the “most important”.  However, plays that have left an undeniable imprint on the theatre world include Hedda Gabbler, The Three Sisters, Playboy of the Western World, Death of A Salesman and Waiting for Godot. Each play pushed the craft of playwriting to greater heights.

Fill in the blank. I wish people would stop telling playwrights to…
…be realistic.  NO.  Be imaginative. That’s why it’s called a “play”.