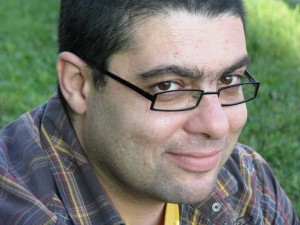 An active member of the arts community in Waterloo Region, Bou-Matar has also directed several productions in Beirut and been an active participant in several theatre, television, and film projects in the Middle East and Tunisia.

What do you look for in a script?
I am personally attracted to the physical, the inter-cultural and the inter-disciplinary. How much the script allows for new and challenging presentations of the body and its politics? What frictions and negotiations does the script present between different cultures? And how much does the script challenge the conventional deadly forms of theater that are usually imprisoned in categories and within the solid walls around performance disciplines?

From a practical standpoint – is there an ideal number of characters or script length?
Particularly in my work at The MT Space, I prefer casts between 3 and 8 performers and shows that are between 50 and 90 minutes in length. This is related to the particular aesthetics of the work we do in terms of its simplicity and minimalist qualities.

Does script formatting matter or can it get in the way?
I don’t think there is a rule or prescribed format for any work of theatre. Plays breath, grow and evolve in the space of creation, in the body of the performer and with the audience attending the show.

How do you feel about detailed stage directions?
In my work stage directions are useless. I believe in recreating any piece of theatre in an immediate way directly related to the time, place and people of creation. This might sound radical, but I don’t usually read the script as I am directing it, I rely only on witnessing it through the bodies and voices of my performers as they play in the workshop space.

What turns you off a script?
It would be too long of a list to mention here!

Does the topic matter as much as the delivery? Or are there topics so important any discussion is worthy of staging?
What matters to me most is the relationship between the performer and the story. What does the performer have to say about the play/ character/or script. It is in this in-between space of negotiation and witnessing that theatre prevails. In that sense delivery might take the front row, but both the topic and delivery are important depending on the relationship that exists between them.

What bad habits from television / movie scripts does a playwright need to break?
Write for the wide shot rather than the close-up.

What is the most important play of the past 100 years and why?
I don’t know what the ‘most important’ play is in the past 100 years. Important to whom, I wonder, and by what standards? Theatre history, the canon and the published plays of the last 100 years have mostly been written, evaluated and categorized by Western male academics, and are not by any way inclusive of all the important theatre achievements of the century. To my personal taste and experience Harold Pinter has been one of the most exciting playwrights (to read) of the 20th century. Fadhel Jaibi (Tunisia) is the most skilled theatre creator I have ever encountered and Pina Bausch – in my opinion – is the most influential figure in the 20th Century theatre/dance.