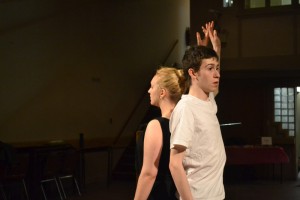 We expanded the PlaySmelter program this year by including Jenny Hazelton’s Dead Pan Land, a piece that blends silent theatre, mime, clown, bouffon, and musicality all into one. We wanted to open up the process to works of theatre that exist outside of text.

Dead Pan Land presents the story of two people who are magnetically drawn together in a world where the mundane, day-to-day routine rules all. With hints of an era past, and nods to our current and ongoing disconnection from each other, Hazelton reflects on loneliness, being a small part of a large mass, and how sometimes what you need is right in front of you.

We brought in Calgary-director Jamie Dunsdon to work with theatre creator Hazelton and dramaturg Carina Gaspar on this project, along with actors trained in dance and physical theatre.

There isn’t a dramaturgical template for developing this type of work, and we only scratched the surface of this process, so it was the first steps of an exploration. One of our main questions was how can we enter a space without our reliance on text? Can we apply typically text-based structures and language to a non-spoken piece? What is our shared language?

Breath in this play became an entry point since it conveyed so much in this piece: character, connection, action and reaction, mood and musicality. The two main characters say very little; their only utterances are sighs and gasps. We played with exhalation and inhalation of breath and asked the actors playing ‘Man’ and ‘Woman’ to share a breath together, one exhaling and the other one inhaling, until they were in sync. It was a simple exercise, but it led to a beautiful final moment of the play. We could then build on top of that moment and work our way backwards through the piece.

We also introduced exercises like if you breathe with the intention ‘I love you,’ how is that breath different if you did it with the intention ‘Is anyone out there’? Attributing underlying dialogue in the piece—even if unspoken—helped flesh out story and intention. Breath was the language between these two characters, and it was also the common language between director, dramaturg, and physical creators.

In the end, we presented 20 minutes of the piece to the general public. For 20 minutes worth of the play, we had a 1 hour talkback session afterwards. The audience was intrigued and hungry to know and see more, and to assist Hazelton in her next steps.