22 MayFinding the Magic: Combining mythology with reality in Karen Thistle’s The Intermediaries 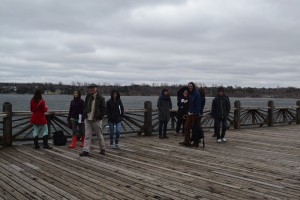 Like with last year’s PlaySmelter creators, there is a distinct voice and connection to the Sudbury landscape. Karen Thistle’s first play The Intermediaries is no exception, as she explores her own folklore tale of one of Sudbury’s charms: Bell Park.

Thistle was highly influenced by her tie to the land, and her love and knowledge of children’s literature. The Intermediaries is a piece about a young girl who meets an elderly woman who claims to see magical creatures in Bell Park. As an ‘intermediary,’ this woman’s job comprises of ensuring harmony between the human and mythical world. Despite early hesitation, the young girl soon becomes fascinated with the park and its inhabitants and starts scouting for dragons and other creatures.

A piece ripe with possibility (literally all possibility, as we are talking of magic)—we had to ask ourselves what is the difference between these two worlds? Bell Park is a very real park in Sudbury, ON, a place so familiar to locals there is actually no signage to direct anyone to it. Within this real place, the playwright has created a world of fairies, sprites and all other things mythic. So how do you design a whole world onto itself—is there a hierarchy in an imagined world? How many creatures are rooted in well-known mythology? Are there creatures specific to Sudbury? What is the balance between these two worlds, and what are the rules?

To assist us in answering some of those questions, the director Ian Maclennan took the cast out to Bell Park so they could get a sense of landscape and character. You could see the excitement as the playwright and actors discovered the spots where the dragon lives, where the Sasquatch hides, and where the King of the Faeries makes his first appearance.

Though we could picture it on the page (and many of our actors are locals familiar with the park), the context of this piece let the actors see it with new eyes. When they started reading their lines in the park they became the magicians. Due to the inclement weather, the cast did not read the entire script but rather walked through it scene by scene; the actors were pulling out key lines, which allowed for a sense a play. You could see the joy they had in getting to create a world, though rooted in reality, out of the playwright’s imaginings.

Though we just scratched the surface, Thistle was able to see how her world was created and how she can continue to take the magic forward into her next draft.