09 MayIn the News: Work in progress

From The Sudbury Star
Thursday, May 9, 2013
By Laura Stradiotto 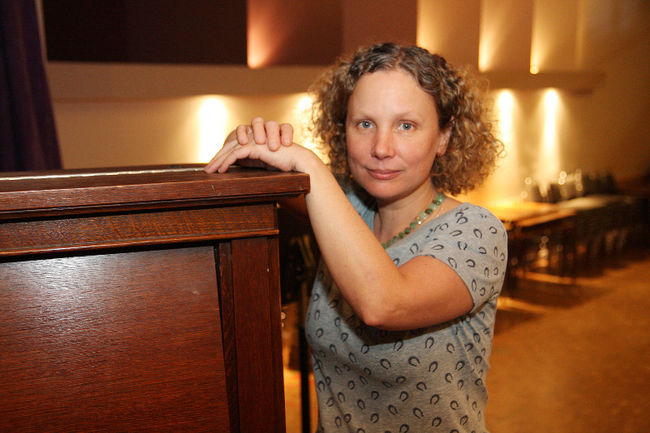 Lara Bradley’s project, Blind Nickel Pig, is one of four new plays that will be given their first readings in front of an audience as part of PlaySmelter at the Jubilee Centre on Applegrove Street in Sudbury, ON. This new initiative is produced by Pat the Dog Playwright Centre. JOHN LAPPA/THE SUDBURY STAR/QMI AGENCY

While researching for a Sudbury Star centennial project, Lara Bradley unexpectedly ventured into the underbelly of Sudbury. “There was just so many good stories,” said Bradley, a former Star reporter, when she read the historic newspaper editions. “I noticed all these headlines about blind pig busts.” A speakeasy, also called a blind pig, is an establishment that illegally sells booze. The blind pigs in Sudbury, at the time, were old shacks that concealed illegal alcohol consumption during the prohibition era and after-hours. “I came across this story about these two sisters who busted out of the Sudbury jail,” Bradley said about her further research. The sisters, along with former Sudbury Star publisher William E. Mason, are among a dozen characters in Bradley’s play, Blind Nickel Pig. “My play is fictional, but borrowing pieces of history and pushing it a bit,” said Bradley.

Bradley began developing the story a year ago during a Sudbury Theatre Centre playwriting workshop. The play follows a young man named Alex who comes from Winnipeg and ends up as a police officer in 1909 Sudbury. It explores his relationship with the jailbird sisters, among other issues the community faced at the time. “There was a proper side to Sudbury and a rough side, as well,” said Bradley. Sudbury’s mining industry attracted immigrant workers and there was much discrimination, not only directed towards them but women, as well, said Bradley. “Back then when there were all these blind pig busts happening, there were only three police officers for the whole town,” said Bradley. “There was also a sense when reading the old papers that foreigners weren’t allowed to loiter in the streets. There was a need to clean up the town, which I get to in the play.”

Blind Nickel Pig is among three plays in progress being presented in front of a live audience for the first time. Originally out of Waterloo, Ont., Pat The Dog Playwright Centre has spent the last two years working to develop and promote the work of aspiring playwrights in Sudbury. The playwriting centre aims to develop emerging and established voices, with a particular attention to areas outside the GTA. Starting tonight, each play within the PlaySmelter reading series will be presented by professional actors and directors. And the stories are vastly different.

Bradley, Eckert and the other playwrights involved in the project have worked intensely in the last few weeks rewriting and fine-tuning their scripts. “We’re expecting rewrites right up until the morning that we actually read,” said Matthew Heiti, STC’s playwright in residence who also is a dramaturgist with Pat the Dog. Heiti’s role is to “rip the script wide open and show them all the parts.” “Each of these plays are coming in from different stages of development,” he said. “By the end of this, they will be closer to being completed, but the process is designed to give you a look inside the work, rather than a finished project.” Presenting these works in progress in front of a live audience is a significant step in the playwriting process.

A sweeping epic about the first Inco strike, Duthie’s play is a love letter to a forgotten past.

A twisted dramatic comedy about a family in turmoil and finding your inner “kink.”

A stirring documentary-drama about the Charles Smith pathology cases that shook communities, such as Sudbury and Sault Ste. Marie.

A rollicking piece, inspired by burlesque and vaudeville, about the early days of prohibition-era Sudbury.

All performances take place 7 p.m. at the Jubilee Centre;

Topics include: Script development, adaptation, the business of playwriting and a director’s roundtable;

Open to all but space is limited. Contact Matthew Heiti at matthew@patthedog.org, or 705-207-7849 to confirm your attendance.