26 NovSelf-Producing at Festivals for Playwrights 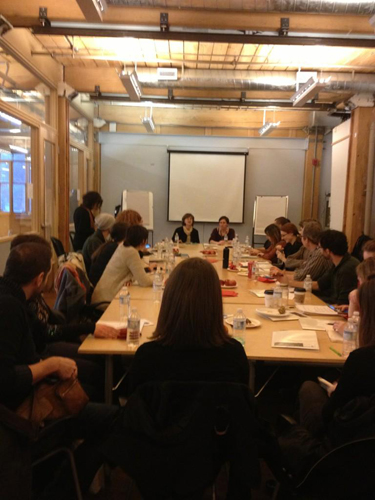 As much as we can give our playwrights a leg-up in this creative world, we strive to do so. Part of our outlook involves advocacy and artistic growth, and oftentimes curating discussion between our emerging playwrights and those who are more established and experienced.

On December 14, 2012 we held an intensive in conjunction with the Playwrights Guild of Canada on self-producing at festivals such as Toronto’s SummerWorks and Fringe Festival. Although the day had a Toronto-centric focus, the imparted knowledge from our esteemed speakers applies to all juried and non-juried festivals. There was a broad spread of speakers from early career to established playwrights and those who sit on the panels of such festivals: playwright and director Evan Tsitsias, GG-winner Erin Shields, Kelly Straughan of the Toronto Fringe and Michael Rubenfeld of SummerWorks.

Evan Tsitsias—one of our award-nominated playwrights who has had success in many festivals—spoke candidly and frankly about the practical components of preparing for a festival (and how not to lose thousands of your hard-earned dollars doing it). From finding your creative team to budgeting, to advertising and rehearsals, Evan provided a comprehensive breakdown of self-producing from conception to performance. He even managed to touch on oft-forgotten details:

Do you need Equity insurance? How much will it cost for you to rent a truck for your set pieces? To print your script? What percentage of each ticket sale will go to the producing company?

For the Toronto-bound, he even listed his favourite tried-and-true printers and poster distributors. It was about being smart with your money, stretching it to make it count without cutting corners. More than that, Evan balanced the financial aspects by speaking about artistic choices, too:

Find your people. Know when to delegate and when you can’t do it all yourself (although of course, you inevitably will try.) And in the end, keep your artistic vision and listen to your instincts.

Simply put here, yes, but a gentle reminder nonetheless that sometimes gets lost in the shuffle. And while the practical components of preparing for a festival are crucial, Evan also stressed that “having your show produced at a festival is a chance for playwrights to have complete creative control over the entire process, from artistic staff to casting, process etc. It is an opportunity to realize your vision for the piece without being at the mercy of a producing company. Seize this opportunity.” As someone in that transition from emerging-to-established, not so far from where our early playwrights sit, his presentation proved invaluable.

Click here to find more of Evan’s tips on how to make the most of your festival experience.

Despite the reverence in the room for Erin Shields, she was her regular down-to-earth, approachable self. She spoke from a seat of experience, but clearly recalled what it felt like to be an emerging creator. Her experience at SummerWorks, Tarragon Theatre, and of course as the 2011 winner of the Governor General’s Literary Award, informed her insights for the group. Given such success, Erin also spoke about life after self-producing, or life with national and international success:

How to deal with success? How to take on commissions? On the heels of success, how do you handle the pressure of writing your next play?

The final part of the day saw presentations from a different perspective: the people behind the festivals. Michael Rubenfeld, Artistic Producer of the SummerWorks Festival, and Kelly Straughan, Executive Director of the Toronto Fringe Festival, spoke about what they look for and what draws them to a piece. Rubenfeld always considers ‘why should this play exist?’ which brings it back to the general wanting of ‘make me care! Invest me.’ Both Rubenfeld and Straughan also addressed the Toronto theatre audience as something to consider. Not to scare or intimidate, of course, but to be aware that it’s one of the toughest audiences in the country to break through. Rubenfeld politely cautioned the playwrights that SummerWorks has become this elevated platform where the who’s who of Artistic Directors come to scope out talent. As per the previous portion of the day, it was real talk by real people who were honest and encouraging. Everyone was there to provide constructive, straightforward feedback.

Although the self-producing world—and theatre in general—is unpredictable and unexpected, the day provided the playwrights with some structure, tools, and motivation to conquer it. It was a fruitful day of a ‘paying-it-forward’ type of wisdom, bridging that gap between the not-yet-produced playwrights and those who have been there and done it.

In case you missed it, watch this short video with the day’s highlights (video courtesy of our Dramaturgical Associate Laine Newman):