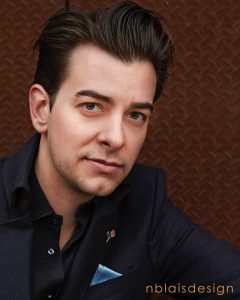 Nick Blais is the set and lighting designer for Receiver of Wreck. He designs across Canada in all manner of discipline and venue from Toronto’s Royal Alexandra Theatre to the base of the Calgary Tower. Board Member for the Associated Designers of Canada since 2013, resident designer for Actors Repertory Company, and Head of Design for Outside the March.

Featured in the Fall and Winter issues of Professional Lighting and Production Magazine for his innovation in “off-the-grid” lighting design and site specific scenography. Nick devotes his design efforts to bringing emotive and transformative visuals to life through the never-ending experimentation and exploration of creative risk.

1. Where did your mind go when you first read through the script? What sorts of images or sensations came up? Have any of these first impressions carried through to your final designs?

When I first read the play I was really drawn to the horizontal journey of these two characters. From coast to coast they travel in a relatively straight line, meeting only once, but having almost identical experiences. It developed into the concept of a Horizon Line. A line at which all lines terminate, intersect, and depart from.  A perspective kind of grid where all these lines converge became our version of the vortex. Coupled with the abundance of shoes and laces, we tied all these experiences together to arrive at a design that focused on connectivity and how the ripple effect of a skipped stone or an action continues to move and affect the water around it long after the stone is thrown.

2. Matt Heiti describes the play as “a piece in motion.” Do your designs capture something of this, and how? Are consultations with the playwright, director, and perhaps others on the creative team part of your process?

He is absolutely right. In a strange way, the play is about two people travelling the country, but ultimately remaining the same — until they meet each other in the middle. It was important for the design to have a kinetic energy that allowed the space to reflect the ripples and speed bumps they hit along the way.  The system of lines and connections are all flexible and can be distorted and affected by the characters throughout the play.

Absolutely. The playwright makes a huge offer with the piece. Together the director and I go through the moments and push some of them further, extending ones that we feel push the themes more, distilling the many offers this play makes to create a focused aesthetic theme that is both functional for the action of the play and tells a visual story.  Collaborating with all players on the production is the most important part of my process.