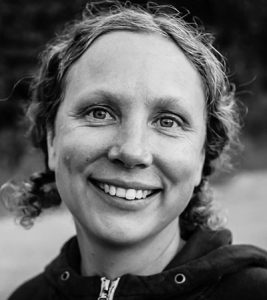 First up is playwright Lara Bradley, on the world premiere of her new play Blind Nickel Pig at #PlaySmelter 2017. A former Sudbury Star reporter, Lara lives with her family – Peter, Sebastian and Quinn– in a little log cabin in Sudbury. Blind Nickel Pig is about storytelling and inspired by sisters: her own sister Kari, her grandmother and great auntie, Loretta and Aileen, and two teenage sisters who broke out of the Sudbury Jail in the early 1900s (who may have been called Annie and Frannie).

1. Audiences were first introduced to Blind Nickel Pig in 2013 at the first ever PlaySmelter. How does it feel to be back, now with a full-scale production of the play?

I didn’t believe this would happen.

That first public reading was one of the most magical and frightening moments I’ve ever experienced as a writer. Held on Mother’s Day evening, I thought no one would turn up. But we had a full audience at the Jubilee Centre and a gifted cast of actors reading. All those characters, made real in a way I hadn’t imagined, it felt like I had stepped into a storybook of my own making.

And then came, some really low points … A theatre company applied for and then received a grant to produce the play. Unfortunately, it dissolved. After many tears, I had kind of reconciled to the idea that it would never be produced. I felt for sure the window of opportunity had passed.

But then Pat the Dog offered up this incredible gift – more workshopping of the piece, more dramaturgy with Lisa O’Connell (Matt Heiti had been my first dramaturg and the impetus for even writing a play in the first-place), and then a production with Matt directing and Jenny Hazelton too. I have so much respect and gratitude towards all three – they’ve really stuck by the play and worked-through so many hurdles to make this happen.

In the past month, we have also been meeting with sound designer/composer Dan Bedard, whose skills I’ve long admired. Thinking about the musical and sound elements has also changed the way I see the story and how it will be told.

In the end, I’m relieved that it didn’t go into production a few years ago. Looking back it wasn’t ready.

2. Can you talk about how Sudbury’s local history first inspired this story?

It’s loosely based on articles I came across while working as a reporter at the Sudbury Star. Back when there were eight of us reporters in the newsroom, we all had the task of spinning through two decades each of microfilm to pick out stories to mark the Star’s centenary in 2009. I had the first two decades starting in 1909 (it was known for its first six months as the Northern Daily Star).

Before twirling through those microfilms, I had never heard of Blind Pigs, but there they were front and centre in the tiny font of the time. Two sisters did bust out of the Sudbury Jail in the early part of the last century. Mrs. Dorland and Mabel Lynn’s story, also played out in its pages – although they had different names back then.

William Edge Mason’s character I drew from the book, The Ghost of the Hardy Boys, written by the first author of the series, Leslie McFarlane, who worked as a reporter at the Sudbury Star in those early days and would canoe in to work from his cottage on Lake Ramsey. Mason ruled the paper for more than three decades (and from McFarlane’s account was a bit of a tyrant).

Francis Cochrane was mayor (although not during the period when this play takes place) and did lose part of his leg in 1909 after slipping in the slush under a train.

Jib would not have had a camera back in 1909. The paper didn’t get one until later.

The story of the “Rs” is based on ones the pressmen, many with missing or crooked fingers, told to me during the lockout of 2001. Pressmen, not thieves, would take key letters, leading up to lockouts and strikes which would make it difficult to publish the paper using scab labour.

Alex, as Ukrainian, would never have become a constable but it’s was fun to imagine him as becoming one.

But back to the newsroom such as it was in 2009 …We all whined and complained about having to go through the microfilms, although for me it was easy to get lost in the stories of the time — people shot each other or themselves, drank too much or not at all, the sound of many languages was heard on the street, people worshipped in different churches, and had little patience for each other’s foreign sounding names. It was a smaller place and the stories left me feeling like people bumped up and against each more than they do today.

3. As a PlaySmelter veteran, what brings you back to this festival year after year?

PlaySmelter has been a tremendous opportunity to learn from other writers and, of course, the workshop presenters. Not to mention the excitement of hearing a new work read by talented actors for the first time or watching a piece unfold and change over time.  PlaySmelter has also pulled together and help create a playwriting community in Sudbury – lots of new friendships and connections have come about because of PlaySmelter.