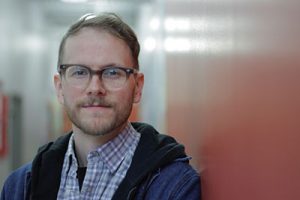 Born in a meteor crater, Matthew Heiti is a writer, teacher and theatre creator living and loving in North Ontario. He is a graduate of Ryerson University’s Acting program and has an MA in Creative Writing from the University of New Brunswick. His plays have been workshopped across Canada and produced at various festivals and theatres. Black Dog: 4 vs. the wrld, is published by Playwrights Canada Press. He is also a Genie-nominated screenwriter and his novel, The City Still Breathing, is published by Coach House Books.

A proud advocate for developing voices in neglected landscapes, Matthew has served as Playwright-in-residence with the Sudbury Theatre Centre and Pat the Dog Theatre Creation. With Lisa O’Connell, he is the co-director of PlaySmelter, Northern Ontario’s first festival of new theatre creation. He explores new work in strange places at crestfallentheatre.com. In his spare time, he is usually working.

1. Could you say more about the Salish Sea human foot discoveries that inspired Receiver of Wreck?

Since 2007, twenty feet have been found washed up on the coasts of the Salish Sea, in the province of British Columbia, and Washington State. To date, only five feet belonging to four individuals have been identified. The rest of the feet have no known owner and no bodies have ever been found. Earlier discoveries of washed-up feet in the area date back as far as 1887. No definitive explanation for these appearances, or disappearances, has been offered. While the mystery is fascinating, the sense of loss, of being separate but yearning, is what really interested me.

2. The two characters in this play have each lost a foot. Has that physicality informed your conception of the story and how does that translate onto the stage?

Receiver of Wreck is a piece in motion: a play about two people on a long journey. The first draft was written over the course of one night, begun in a midnight apartment on the side of the highway, continued in the back of a taxicab and finished on a bus ride from Fredericton to Moncton. We’ve workshopped it in Kitchener, Sudbury, premiered in Burlington and are now bringing it home to Sudbury. It’s taken 14 drafts and 6 years and passed through the hands of a host of fantastic collaborators. More than anything it’s a piece in motion, about the possibility of “getting there.”

All a long way of saying: the music of the piece is counterpointed by this very tangible loss of the two characters at the centre. They feel a growing disconnection with their own lives, which has manifested in the loss of a limb. They have every reason to stay in one place, but what is interesting for us, theatrically, becomes trying to get them to cross the immense distance of our country.

3. Sudbury has seen productions of some of your other plays. What can they expect to be different with Receiver of Wreck?

Much of the work I’ve been involved in, here in Sudbury, has been about the mythology of this community: buildings, neighbourhoods and people, here and gone. I continue to be compelled by how myths hold us together, stories latticed behind stories, but the lens of this piece is the larger national myth. These characters are moved by the deep rumblings of a relatively young nation. Their journey is a new kind of odyssey, and their epics are the Beachcombers, the Log Driver’s Waltz and the Littlest Hobo. They are adrift in digital waters.

4. As one of the lead architects of PlaySmelter, could you have anticipated the festival’s growth over the last five years?

Seven years ago when I first arrived back in Sudbury (again), it was hard to find other theatre creators to collaborate with. The most startling thing for me is, now, there is a whole host of fantastic playwrights and theatre creators working in this community. The aim was always to encourage and create opportunities for theatre creators here, while also beginning to capture the voice of this city, this region. We’re seeing more of our artists across all disciplines staking a new kind of claim in the basin, acknowledging we can create work here, rather than taking their abilities elsewhere. It’s a bigger movement that I’m glad PlaySmelter can be a small part of. It’s encouraging, exciting, but also a reminder that there’s still so much more work ahead.