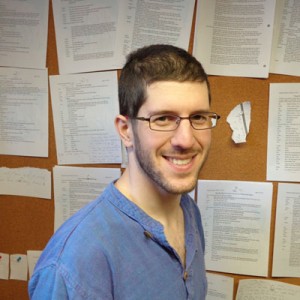 Daniel Thau-Eleff is a playwright and performer whose plays include Good People Bad Things, King’s Park, Remember the Night and Three Ring Circus: Israel, the Palestinians and My Jewish Identity. Daniel is the founder and artistic producer of Moving Target Theatre Company and has worked as an actor, assistant-director or stage manager with many of Winnipeg’s theatre companies.

What inspires you as a playwright? Where does your motivation come from?

In my first theatre class in university, my instructor said theatre is a “search for truth,” and that still seems as noble and important to me now as it did then. I feel like we humans are very drawn to stereotypes. I don’t know if it’s all humans or if it’s particular to this society but it seems natural enough – we defend ourselves against the complexity of the universe by going, “Got it.” “Now I know this.” “Now I know that.” And it often provides safety for us. But, of course, anything we learn is ever only partially true, or it ceases to be true, or it may not be true about the next situation, so we’re left with stereotypes. And I mean stereotypes about everything, not just racial/gender/etc stereotypes, but really everything We are sure We know. I find the Truth is always surprising, and it always defies stereotypes. So I’m looking for art – in other words, fiction – that exposes Truth. And a lot of my work is rooted in biography or autobiography.

What is your writing process? Is it basically the same for each play or does the script affect your process?

I think it’s a little different each time. There seems to be a lot of research involved – books, movies, plays, interviews – especially interviews, I find that to be a very productive way of getting personally involved with a story. There’s a lot of fishing around and “following leads.” Scribbling down a scene or, more often, part of a scene, different variations on the same scene, in no particular order. There have been a lot of times when I have re-written a scene to REALLY express something PERFECTLY, but it turns out the first draft was more alive because the rhythm of it was more natural. Then there’s a whole process of sorting, combining, writing new scenes as one idea leads to another, connecting the dots, arranging it, figuring out what it’s all about.

What are your most productive writing habits?

I think the smartest thing I do is involve other people. Because I don’t have the discipline to hold myself accountable to myself. Once there are other people counting on me, then I have to get it done. Also, it’s true what they say – it really is a collaborative art form! I’ve been fortunate to work on most of my pieces with Chris Gerrard-Pinker as dramaturg, and he works on a very collaborative model, where the dramaturg is almost as involved with the playwright as a director would be with actors – we work through the material together scene by scene, from the minute details to the big picture. And I’m starting to think that that model of dramaturgy is rare. Is it? I don’t know. And maybe other people would rather work on their own, but can you imagine? A rehearsal period in which the director only shows up once every week or two and only makes a couple of comments? And don’t get me wrong, my work has benefited greatly from the friends, colleagues and mentors who have taken a look at my work and offered comments. But for me, this kind of hands-on dramaturgy is very important. I also owe a lot to Arne MacPherson, who has directed some of my work, which, for new material, becomes a different form of dramaturgy. And the actors I have worked with – we’re a little off topic, but I’ve had these wonderful experiences where we were putting on my dark comedy, Remember the Night a second time and I was mostly working as producer but I’d stop by the rehearsal hall once in a while and suggest some script changes and the actors would say, “Oh, I don’t know about that” and explain why the line should stay as it is. And, of course, they were right – by that point they knew the characters better than I did. You know? It’s really not just about the playwright and their sensibilities, it’s about what works – what releases the truth of the play. Which, again – it’s a collaboration – or, collaboration can produce really good results.

What do you wish you knew about playwriting or the theatre ecology when you started?

Well, when I started, I really didn’t know anything about playwriting, I learned as I went, and I think that’s worked well for me. And I knew enough to learn from mentors – Chris and Arne, as I said, Reg Skene, who founded the U of Winnipeg Theatre Department, David Diamond in Vancouver. I would probably advise beginner playwrights to “write what you’re curious about” rather than “write what you know,” but that’s just me being clever. I guess one thing I wish I had clued into sooner was the world of touring. I learned to self-produce, which has been extremely important to me and my work. I’m still early in my learning about how to tour productions. But there’s a whole conversation going on across the country about “Beyond the Premiere” which makes sense. I mean, we spend so much time and energy writing these things, isn’t it great when they go on more than once?

How important for playwrights is networking/knowing your community?

Yes, very. Not only the type of networking I just talked about but also, to develop networks of like-minded people, supporters. Community. If we get the privilege to live and work as artists, whether full-time or even part-time, I think there’s an obligation that comes with that. I think we should be enriching peoples’ lives. And it works both ways, because when we work, sometimes for years, to get a show up on its feet, we want people to show up. So I always have an answer to “What are you doing these days?” And: where else is our inspiration going to come from other than the people we talk to?

What upcoming projects are you working on?

Funny you should ask! I’m in the process of writing Deserter, about an American soldier who fights in the Iraq war, then deserts the army and comes to Canada, where he lives without status for 10 years, then becomes unstuck in time. We’re doing a reading of an excerpt in Kitchener-Waterloo as part of Impact, on September 27. I’ll see you there!