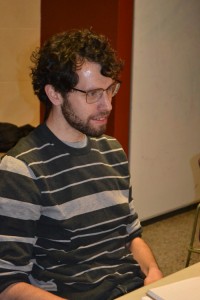 Kyle Capstick is an emerging playwright and graduate of Cape Breton University whose plays have been produced across Nova Scotia. Shortly after moving to Toronto last year, he participated in our 24-Hour Contest and was awarded first place for his work I’m Not Anybody. After a mini-residency with us during which he continued working on his winning play, we asked him to tell us a bit about his experience.

What is the setting of your play?
I’ll have to differentiate between the original draft, and the draft that emerged following the two-day residency with Pat the Dog. In the original 24-hour piece, the only established setting was Cape Breton. The newer draft doesn’t live in one specific setting since it travels from big city Toronto, back to Cape Breton and then onward to more exotic locales.

Can you give a one or two line summary of the piece?
The original 24-hour piece was a set of three monologues that explored the ideas of salt, fiddle, and lobby, respectively (these were this year’s secret prompts) and the nickname “Fish Bone.” The newer draft kept the prompts at the heart, but used them to explore one of the character’s stories through her relationship to her mother, a woman named Anita, and a man named Fish Bone.

Where did the idea of I’m Not Anybody come from?
With the 24-hour draft, I treated it more as an exercise than anything else, and felt my way through it by riffing on three words and creating stories and characters to associate with them. I think a lot of the stuff that came out was my way of exploring issues and ideas of space, time, and love that I’ve been obsessed with since moving from Sydney to Toronto and into the “real world.”

I’m Not Anybody was written as part of Pat the Dog’s 24-Hour Playwriting Contest. How did this artificial time limit help or hinder the process?
I think the artificial limitation was a bit of a gift in my case. For as long as I’ve been writing, and like lots of other young playwrights out there, writing has always been something I do in my free time. This means between work, volunteer work, class, and maybe a social life (occasionally). In response, I’ve been forced to sit down and power my way through drafts. The great thing about the 24-hour model was that it expected me to do just that and not worry about whether or not what I was producing was my best work. It was fun and kind of liberating to work under these expectations. I think it allowed me to finally unearth what’s been lurking in the back of my mind.

You continued exploring I’m Not Anybody during a two-day residency with Pat the Dog. What aspects of the play were you looking to explore during this time?
When I first came back to the piece, my biggest concern was excavating (or composting) what I’d created during the 24-hour period in order to find my way back into the piece. When I’d first sat down with it, it felt very much like something I’d produced as an exercise and I wanted to make it into a piece I could connect with.

What did you discover about your script or yourself during the residency?
I like to think I discovered a lot about both the work and myself. The more I write the more I realize that—for me anyway—writing is an act of discovery both of what’s in the work and what’s in myself. With regards to the piece, I found my way to the piece I’ve been wanting, and trying, to write for the past few months (of course, this discovery came at the end of a draft). A lot of the things I learned about myself are harder to put my finger on, since they don’t specifically exist as words on the page, but there are some of those things too.

What was the greatest benefit of the residency?
There were two major things this residency gave me. The first was the time to really commit two days to figuring out where I could take this piece and, conversely, where it could take me. Part of this time was also the freedom to write. I was brought in and told that for these days my commitment was to develop this work, which was incredible and very humbling. The second thing I took away was the empowerment to really push myself and push this piece to reach its full potential.

What advice would you give a playwright going into his or her first residency?
I feel a little odd giving advice, since I think every playwright is different and every process is different. My best attempt would be to let yourself be open to the experience, and trust yourself to know what’s best for the work you need to do.

Any final comments you’d like to add?
I’d just like to re-iterate how grateful I am to Pat the Dog for their support and the opportunities with which they’ve provided me.