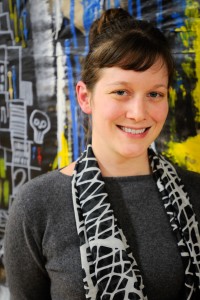 Allie Bell is an emerging playwright, with a passion for the disturbed. Her fingers dance across the keyboard producing the worse possible scenario. She is searching for a length of letters leading to an evocative end. Although, her first works were written for large casts, since her studies have advanced, her pieces have become more realistic for modern productions. But, the onstage historic epic, with a huge cast, is still something that appeals to her soul. Right now, her writing is philandering among social issues like pedophilia, lesbianism, and AIDS (not in the musical sense).

Allie has worked as a stage manager in Halifax and Toronto, but her passion is playwriting. She has seen her work produced in Halifax and Ottawa and is currently casting for the full production of Neighbours in the 2012 Toronto Fringe Festival, but for now she is enjoying her time as a theatre production student at Humber college.

In October, she won Pat the Dog’s 24-Hour Playwriting Contest for her script, Neighbours. It was recently workshopped and presented as part of our piece/meal series. Here’s what she had to say about the workshop experience.

Setting: A world not unlike our own but still completely different.

Can you give a one or two line summary of the piece?
An absurdest view into the government’s freedom to accuse an innocent of cavorting with The Plums.

Where did the idea for Neighbours come from?
I am always flabbergasted at the government’s willing to bend the rules in order to succeed in what they see as protecting a country from terrorist threats,or any threats. I think the government needs to be held accountable for all the innocent people who are a perceived threat without doing anything wrong in the first place. I think it’s a little ridiculous, so I created a piece that should make people think and make people laugh.

Neighbours was written as part of Pat the Dog’s 24-Hour Playwriting Contest. How did this artificial time limit help or hinder the process?
The time limit gave me an excuse to do nothing but write for 24 hours and that’s really the fun part. I don’t think it hindered my process at all, in fact having deadlines makes my work stronger.

What aspects of the play were you looking to explore during the workshop?
I wanted to see what a director could do with my work without me saying what was right or what was wrong. I allowed the people involved to play with my work because something interesting will always come when people are allowed to explore without judgement. I was hoping to see a vision different than what was in my head.

What did you discover about your script or yourself during the workshop?
I discovered that I have to allow myself to just write and not concern myself with how the piece will be mounted or where, I just need to write and let others figure out how to make my words leap from the page.

What was the greatest benefit of the workshop?
Having dramaturgical support for the further development of this piece. I have a slot in Toronto Fringe so this play has a stage, and the dramaturgical influence will take this piece to a whole new level.

What advice would you give a playwright going into his/her first workshop?
Be open! Don’t be upset if what you see is not what you plan to do the future, just enjoy a different perspective and be willing to watch your words develop.

Any final comments you’d like to add?
Working with Pat The Dog has been one of the most rewarding opportunities of my life and I have grown as a writer because of this centre. Pat The Dog fills a great void in the Ontario playwriting community and I am so lucky to be a part of it all.